Pursuing education abroad is always an expensive venture. The cost alone of uprooting yourself from your home, traveling to another country, and supporting yourself during your stay there will almost certainly drain any money savings you may have set aside. So unless you’re rich or at least blessed with a wealthy benefactor, a foreign degree will likely register in that head of yours as an idea nice enough to think about but too ambitious to actually take seriously.

Unless, that is, you give yourself a third option by snagging a scholarship. I tried my luck down this path and, as fate would have it, I managed to do it after my very first attempt.

The scholarship program I qualified for is called the New Zealand ASEAN Scholar Awards (NZAS). It’s available to citizens (aged 40 or below) of selected Southeast Asian countries who intend to pursue post-graduate study in New Zealand.

If you will go over their website (click here and here), you’ll find that the program supports most – if not all – fields of study. However, applicants will have to explain how their chosen course will allow them to make a significant contribution to the development of their respective countries. Once they complete their study, the scholars are then required to return to their home country and work there for at least two years to fulfill the promise they made about helping in its progress, i.e., foster national development by applying everything they have learned from their studies.

As is true with most scholarship programs, it is necessary that an applicant must have been already accepted by a school in the host country (New Zealand, in this case) before filing his/her application with the program. He/she will have to submit the school’s Offer Letter, which, along with other application documents, will be evaluated by a Committee overseeing the selection process.

But enough of that. All these information are available at the NZAS website. Let me share how my experience as an applicant unfolded. 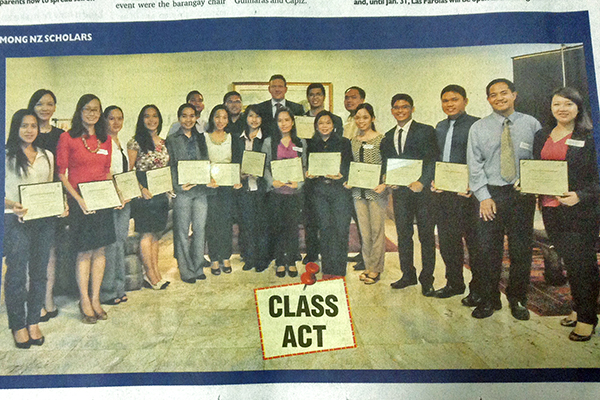 ALMOST FAMOUS. Group photo of the 2014 NZ ASEAN Scholar Awardees as published in one local daily. Also inset are NZ Ambassador to the Philippines Reuben Levermore and some members of the interview panel.

It was early last year, through a confluence of various factors, when I decided to apply with NZAS. I remember having heard of it before, and having looked it up on the internet, just to see what it’s all about. But it was only in March or April last year that I really took a long hard look at the idea of studying abroad.

Early on, it was apparent that I was pressed for time if I were the least bit interested in going for the scholarship. While its application deadline was still in July, those for university applications in New Zealand were another matter altogether.

In my case, I had quickly narrowed down my school choices to two: the University of Auckland (UoA) and Victoria University of Wellington. Their performance as per the QS World University Rankings had something to do with that. What eventually made me go for UoA was the somewhat easier – in my opinion, at least – application process it had. That and my unwillingness to spend for two sets of application documents, and all the hassle that go along with their preparation.

Having made my choice of school did not make my task easier. Fact was, the deadline for post-graduate study applications with UoA was the end of May.

I cannot remember now how exactly I was able to muster enough motivation within a short period of time in order to complete the entire application process but somehow I did. End of May came and all the documents I had to upload, I had uploaded. All those I had to send by courier had been physically delivered.

In a little over a month, I got some feedback from the university. They sent me an offer letter (which was great), only that it wasn’t for my entry to the Master of Laws (LL.M) Program (which was not so great). Instead, the school was offering me a place in their Post-Graduate Certificate in Law (PGCLAW) Program. A PGCLAW is a certificate course which is effectively half of an LL.M degree. Apparently, my grades (the sole basis of their evaluation) were not LL.M caliber enough.

With the deadline for scholarship applications looming, I found myself also losing interest with the entire effort given my predicament and the uncertainty surrounding it. Back then, I wasn’t sure if I could still apply with only a PGCLAW offer in hand. The NZAS website is not very particular about accepting applications involving mere certificate courses. Worse, when I inquired with the local scholarship coordinator, she seemed certain that my application would be rejected unless my certificate course has something to do with geothermal energy.

If my application won’t even be considered, I thought to myself, then why should I bother.

However, similar to what transpired during my university application, I again found myself pushing forward.

I will say though that what ultimately egged me on was the guilt I felt whenever I thought about the people (referees – former teachers, supervisors, and a boss at work) who took their time to prepare recommendation letters in my favor. To a lesser extent, I also did not want to see the money I spent for that expensive English proficiency exam (TOEFL) go to waste. (I did not know then that I was going to be reimbursed for the test fee I paid for) The least I could do, I told myself, was to submit my application. I owed it to myself and to the people who believe in me to at least try.

And so try I did. I turned in my application on the very deadline for submission.

After yet another month of waiting, around the first week of September, I received a letter-email and got a call informing me that I had been shortlisted by the Selection Committee and that I was still being considered for the scholarship. They had me scheduled for a panel interview the following week.

Regarding the interview itself, I can say now that I knew mine went well as I made my way out of the NZ Embassy. By that time, I was still running through my head everything that had just transpired. I really can’ explain it, but I had that feeling then that, all things considered, I handled the interview pretty well. Good enough that by the time it was over, I had that familiar (positive) sensation I also experienced after my law school application interview in UP.

My feelings were confirmed when the news came some time in November through yet another phone call. I learned that, together with 17 others, I bested more than 200 applicants and managed to earn for myself a scholarship for a one-year LL.M program. Yes, you read that right. Despite being offered only a spot in the UoA’s PGCLAW program, my scholarship was structured to cover an LL.M study, should I qualify for it after completing the PGCLAW course with flying colors, so to speak.

I was beside myself that day. 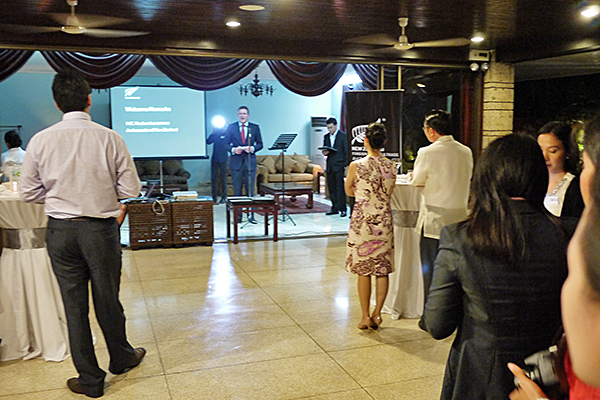 GRACIOUS HOST. The NZ Ambassador addresses the crowd during the NZAS awarding ceremony held at his residence.

The NZAS awarding ceremony was held on 21 November 2013 at the Ambassador’s residence in Forbes Park. It was a small and simple affair with embassy personnel, some scholarship alumni, and a few other benefactors of the program joining the awardees (some of whom came with their relatives in tow) in a quaint private celebration. It was preceded by an orientation activity intended to give us incoming scholars an idea of what awaits in the next couple of weeks leading up to our departure for New Zealand, and eventually our stay in the Kiwi country for a significant period of our lives.

Remembering it now, I distinctly recall that it was when all the pizzazz had disappeared behind me, while I was on my way home, that it finally hit me: I got a scholarship and it’s going to bring me to middle earth.